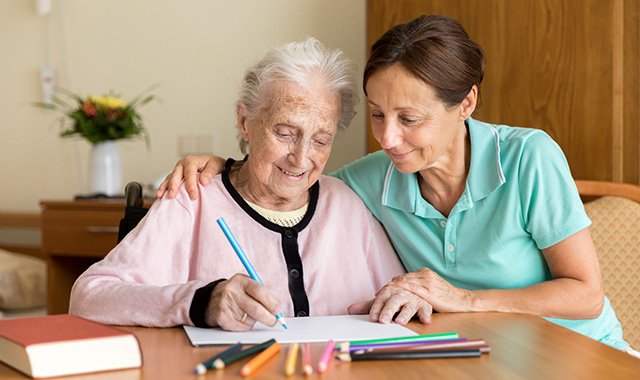 Multiple sclerosis and dementia are completely unrelated when it comes to neurology, but Dr. Andrea Dellaria treats both. Meet the newest doctor to join Northwest Neurology.

Dr. Andrea Dellaria has always been passionate about women’s health, so in medical school, she contemplated multiple paths.

“Initially, I considered going into OB/GYN or primary care,” she recalls. But, she also had another passion: neurology. To her delight, she found that neurology and women’s health often intersect.

“Multiple Sclerosis is actually a female-predominant disease,” she explains. “It’s also a disease that, unlike some other processes in neurology, we have treatments for. Over the course of the past 10-15 years, we’ve seen that patients have better outcomes, and it’s exciting to be a part of that.”

MS is a disease that affects the myelin sheath – or insulating covers – of the central nervous system. The coating around the nerve axon is stripped away, causing nerve impulses to translate slower than they should. Symptoms include visual changes, weakness and problems with walking.

Each instance of MS is a little different, so Dellaria treats her patients accordingly.

“There are so many treatment options in terms of mode of administration and side-effect profiles,” she says. “That means treatment is always a discussion. I need to learn more about my patient. Is she trying to get pregnant or run a marathon? What other comorbidities does she have? All of these things can come into play – it’s not just giving out a medication.”

According to Dellaria, MS affects about 2.5 million people worldwide, estimates of approximately 400,000 people in the U.S. The prevalence is about 90 per 100,000 people.

It’s unclear why women are affected more predominantly than men, but Dellaria keeps up with the research.

“If we had the answer to that question, I think we’d know a lot more about MS and what causes it,” she says. “There’s some thought it has to do with sex hormones, but at this point, there’s not enough research or literature on it.”

“I also have an interest in memory problems, so about 25 percent of my practice is spent with dementia patients,” Dellaria says. “Part of my job is to figure out if the memory problems are due to normal aging or if there’s an underlying neurodegenerative process going on. There aren’t really any great treatments for dementia at this point, but the field is really working on it. A lot of what I do is assist families in adjusting the patient’s lifestyle.”

As the newest member of Northwest Neurology, Dellaria is finding the practice to be a good fit for her. She’s able to treat patients of various neurological diseases in as little as 24 hours, which is important to her.

“I have all the tools I need at my fingertips,” she says. “I’m also from the Chicagol and area, so it’s nice to be able to practice in the community.”

She practices general neurology with a sub-specialty in Multiple Sclerosis and other immune mediated neurological diseases. She has a special interest in women’s issues and their intersection with neurologic problems. In her spare time, Dr. Dellaria likes to spend time with her family, travel, read, write and sample different menus at Chicago restaurants.